Top 5 Video Editing Tips that will Make your Editing Faster

Showcase Your Creative Side with Audio and Video Editing Course

After shooting or filming a video you have raw footage that isn't enough to create a successful film. After filming, raw footage has to go through many processes to become a successful film. The process of editing together raw footage, incorporating visual effects, adding in sound, and color grading a film is part of Video Post Production. Below, you’ll find a complete guide on the post-production process, including the tools you’ll need to get started. Bapu Graphics one of the best Video Post Production Course Institute In Delhi teach you this video post-production course with practical training.

Video Editing course or Video Post-production course really helps you to bring out creative editor inside you at Bapu Graphics. This audio & video editing course makes you ready for the most crucial part of any film or song, “EDITING”. This course helps you to become a master in all kinds of video production work whether it is Editor, Graphics work, Special effects artist and helps you to convert in complete video post-production artist. When you get equipped with this course then it is sure to excel in the best editing softwares like Adobe Premiere and Adobe After Effects in media management. Get ready to convert a simple and raw piece of video footage into a dynamic or interesting movie. 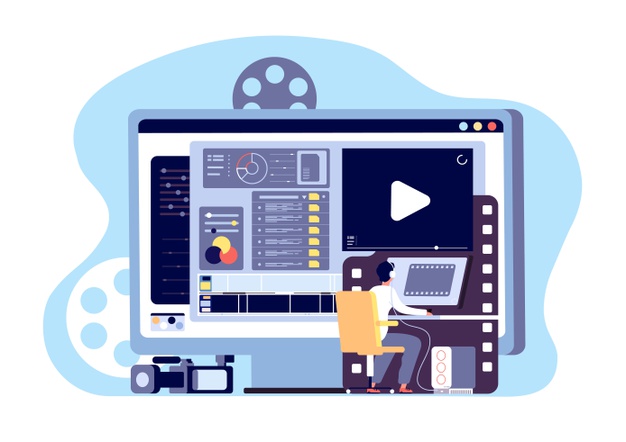 We offer the same course at different levels such as ADVANCED, SHORT TERM and SPECIAL as per your requirements.

The objective of the audio & video editing course

Post-production processes may vary depending on your specific project, but they typically fall under the following general steps. If you’re just getting started in filmmaking, you can use these steps as a general checklist to learn a video post-production course in Delhi.

Adobe Premiere Pro can be used for post-production editing to piece raw footage together into a cohesive story.

Once the footage of the film is final, you’ll begin to add and enhance the sound. This doesn’t only involve adding background music, soundtrack, and sound effects, but editing out background noise and piecing together dialogue to match the flow of the story.

Next, artists and engineers design computer-generated visual effects. This enables filmmakers to achieve effects that aren’t always feasible (or are too expensive to execute) in real life—like aging an actor or creating a massive explosion.

Separate from adding sound effects and music, sound editors must also go into the film and adjust audio levels.

During this stage, a color editor goes through the movie frame by frame to adjust the color for both mood and consistency.

Learning these steps of Video Post production course in Rohini, with Bapu Graphics, the best multimedia institute in Delhi, will unable you to create spectacular videos out of the raw footage gathered.

The best tool for designing theme-based Production Design, This is the main software of designing to start with in which you will learn to create Graphics with special Effects. Managing all your design, Images, Graphics is done with this advanced Image manipulation software. Learn Adobe Photoshop with the latest techniques and versions.

Adobe Illustrator helps to begin a video post-production work in designing, Layouts, Promos this software also helps to design a complete plan of the movie with scene by scene introductions. This is the first step to learn while doing a video post-production course. Learning Adobe Illustrator is a must today for all students expecting to make their career as web designers.

Adobe After Effects is VFX or special effects software to create motion graphics, Visual Effects & compositing application developed by Adobe Systems & used in the post-production process of film-making and television production. It can also in used for keying, tracking, rotoscoping, compositing &  animation. It also functions as a very basic non-linear editor, audio editor, and media transcoder.

Editing is the process of manipulating & rearranging video shots to create a new work. Editing is usually considered to be one part of the post-production process — other post-production tasks include titling, color correction, sound mixing, etc.

In 3D animation we will learn to model different products or scene layouts to showcase in videos or Films we are developing, First step is to create models and then we achieve its realistic look to animate these. An animated scene starts with one picture, which is referred to as a frame.

2D animation is the traditional animation method that has existed since the late 1800s. and it is also required for the video purpose, there are lots and lots of animation you see in the television world are created with this technique, which allows us to communicate our message to our target audience in a more fast and efficient way.

Once, You are done wih you Video Post Production Course in Rohini, Delhi with Bapu Graphics, you master the skills of a fine and skilled video or film editor, as there are hundreds of production houses in different parts of the country, searching for such professionals. You can be placed as Video Editor, Animator, Promo Artist, Video Designer, etc in different industries giving a boost to your career. Below is a list of job profiles in the video post-production course:

After completeing Video Post Production course in Rohini, Delhi with us at Bapu Graphics, Our Students are been placed with well known companies, who have been trained with 100% practical training by our experienced faculty.

Answer: In the Video Post-production process, we edit portions of the raw video. During this process, the post-production crew arranges raw footage adds music, voiceovers, and sound effects, and visual effects.

Answer: After shooting or filming a video you simply have raw footage that may or may not tell the story you want to tell. Before presenting this video to anyone you have to edit it first that's why without video post-production process, there is no finished product.

Question 3: Who can pursue the video post-production course?

Answer: Students who are interested in learning about media entertainment such as television, films, video production can pursue Video Post Production course in Rohini.

Question 4: Do you provide online classes for the Video Post Production course?

Answer: Yes, We do provide live one-to-one training sessions by the teachers who teach at the center so that the quality of education is not compromised.

Answer: No, as this only requires creative skills and zeal of creating spectacular videos, we will teach you the rest.

Question 5: Can I enroll in Video Post Production course in Rohini, if I live outside New Delhi?

Answer: Yes, we have many students who are not Delhi-based. We also offer online classes for those who are not able to take classes in our institute.